For many years, transistor amps sounded poor by comparison to their valve cousins, but nonetheless managed to capture the greater part of the market, due in large part purely to the manufacturers success in marketing them. These days, valves have fallen out of use completely in most types of electronic equipment, except in the audio industry and a handful of military applications. As these markets are very small, valves themselves are now several hundred times more expensive than transistors or chips.

The result of this is that valve amps are now relatively expensive, often coming in at around double the price of a transistor model with the same basic specifications. It’s also true to say that transistor designs have developed considerably in the last twenty years or so, with the result that many transistor amps do now actually sound very good. Designers have begun to understand why valves behave the way they do, and to replicate this behaviour using transistors and, most recently, digital signal processing or DSP’.

Hybrid designs represent another noteworthy trend. As brand names such as Valvestate and Transtube imply, these make use of both valve and transistor technology. Typically, a hybrid will combine a valve preamp with a transistor-based power amp, on the premise that the valves will impart their unique characteristics at the preamp stage, leaving the transistor power amp stage to amplify this as neutrally as possible. Many hybrid amps in fact incorporate only one valve, and this has led to accusations of gimmickry which are not always fair. 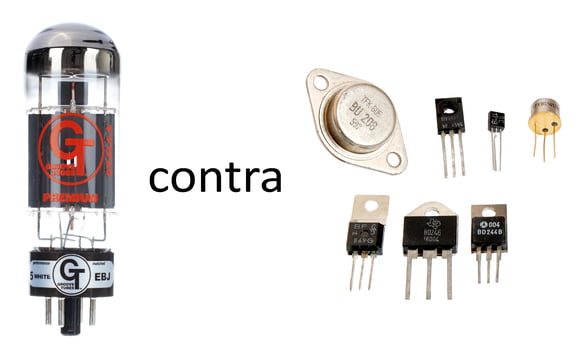 As a rule, transistor amps dominate the cheaper end of the market and are better value in overall terms. Although valve amps tend to be rather more expensive, they remain the only choice for the many players for who sound quality is more important than value. These players point to technical issues on which hybrid amps will, they say, always fail.

The first of these claims is that the classic rock distortion sound is not just produced in the preamp. Power amp distortion and even speaker distortion are important too. This is perfectly true - the sound of a Marshall stack at high volume, especially those produced before the introduction of the master volume control, is that of the whole thing roaring away at full tilt.

The second point is that valves respond to an input signal up to a thousand times faster than transistors and because of other basic properties, valve circuits are usually far simpler than transistor circuits, incorporating fewer additional components, and therefore have a shorter signal path - it is felt by some that these factors make valve amps feel far more responsive. Within the terms of this argument, transistor amps and digital models will by definition never be able to compete at the very highest level.