There are three main transducer types used by microphones to convert sound waves into electrical signals, commonly known as ‘dynamic’, ‘condenser’ and ‘ribbon’: 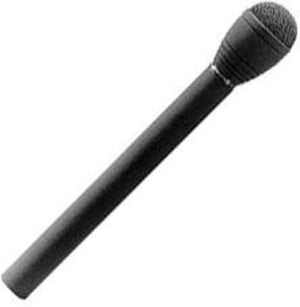 The dynamic microphone is the most basic type, and usually the least expensive. Inside the mic is a small, thin plastic membrane or ‘diaphragm’, that moves in response to audio waves. When the diaphragm moves back and forth, an attached coil moves within a magnetic field, which in turn generates an electrical current in the wire of the coil. Since the mass of the diaphragm and the voice coil is actually quite large compared to the energy that’s contained in the acoustic signal, it takes time for the diaphragm to respond to a signal, restricting how fast it can move – this is ‘inertia’ at work if you remember your school physics lessons! For this reason, dynamic mics tend to respond poorly to high frequencies in comparison to other microphone types. This is not too much of a problem for speech though, as it has a much lower bandwidth than most musical signals. Dynamics also tend to be more robust than other types, and benefit from not requiring a source of electrical power.

The heart of a condenser or ‘capacitor’ microphone is a pair of metal plates placed in parallel to each other, spaced at a distance of about two hundredths of a millimetre. One plate is fixed, and the other is a diaphragm which is free to move in sympathy with incoming sound waves. When the spacing between the plates changes, the capacitance varies - remember that physics again! If a polarising voltage is placed across the capsule, a small electrical signal is then produced which describes the soundwave.

This electrical signal produced is much smaller than that of a dynamic mic, which is why a built-in pre-amplifier is required to bring the signal up to normal microphone level – this should not be confused with external mic pre-amps which are used to bring mic level signals up to line level. Because of the built-in pre-amp, and also the requirement for a polarising voltage, condenser mics need a source of electrical power – this normally comes in the form of ‘phantom’ power which is a back voltage supplied up the cable by the (external) mic pre-amp, although some cheaper models with pre-polarised capsules can also run on batteries. Condensor mics that use valves for their internal pre-amps need a separate power supply, as phantom power can’t supply the necessary current. 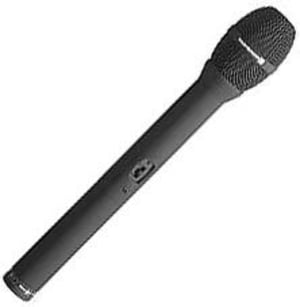 While the extended frequency response of a condenser is not particularly necessary for speech, their faster transient response tends to produce a crisper sound, and they are also great when the reproduction of ambient sound is also required.

Ribbon mics are actually a special case of dynamic mic – rather than a coil attached to a separate diaphragm, they use a very thin metal ribbon as a diaphragm. This is suspended between two magnets and its movement in sympathy with sound waves produces an electrical signal, in much the same way as a regular dynamic. Due to the ribbon’s very low mass however, their high frequency response is more comparable with that of a condenser.

Although they are loved for their warm sound, ribbon mics do have some disadvantages though and so are generally not favoured for reporting use – they have relatively low output, are not terribly physically robust, can be easily damaged by phantom power, and they have a figure of eight polar response (a kind of back to back cardioid – see below). Having said all this, the Coles 4104 ribbon mic with its special noise-cancelling design, is arguably the industry standard for commentators – you may well have seen this in use on TV. 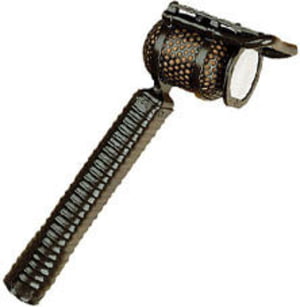