The majority of available digital multi-track compact studios come with fully equipped effects sections. Besides the standard ambient-(reverb, delay) and modulation effects (chorus, flanger, phase etc.) the devices come with, depending on the build, more or less complicated master or excited patches. Larger devices also offer the option to connect external effects devices. So it pays to take a look at the technical data before purchasing a multi-tracker.

Guitarists especially can get their monies worth with the opulently equipped amp modeling sections of many compact studios. In general the amp sounds offered are based on the modeling concepts of the different manufacturers. Depending on the product, well known concepts such as V.A.M.S-(Zoom), COSM- (Boss/Roland) or R.E.M.S-Modeling (Korg/Toneworks) etc. may be used. But that's not all! In addition to patches for 6-string players, the compact all-in-ones also offer bass amp models with appropriately tuned cabinet simulations. 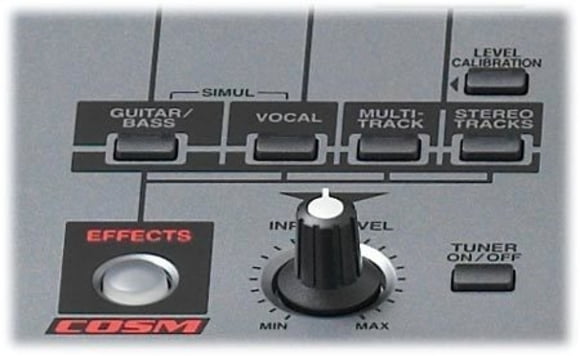 Generally the sound quality of effects on all available products is astonishing. The responsible processors do an excellent job, through the effects bank, of giving a convincing and impressive performance. This means you don't need to worry about dragging your amp to every session. Which offers, especially in the area of home recording (and for amps with no useable line-out), a lot of advantages.