An integrated drum computer turns a digital recorder into a self-sufficient work station. Since drum computers generally work independently from the audio recording section they don't not take up any of the precious audio tracks. And with 8-track recording systems like the Boss BR-900 CD, the Boss BR-600, or the Zoom MRS-8SD the integrated drum computer is also freely programmable. 4-track mini studios like the Zoom PS04 or Korg's D4 forgo this function in favor of a wide arrange of the most common grooves and styles. The patterns are carefully chosen and since you can access the different variants of the individual grooves, it is possible to tinker with the backing track for already complete songs. 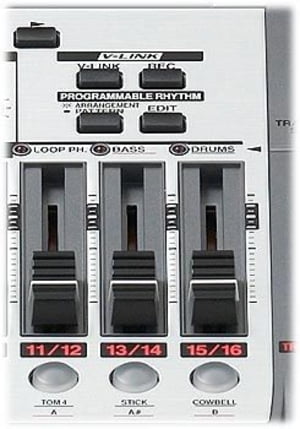 Some multi-track compact studios are equipped with an integrated CD/RW burner. So that you can burn completed projects, without the use of a computer, onto a CD. The second advantage of a burner: Completed projects with tracks and effects can be easily archived as well as loaded - freeing up the hard drive and allowing sound samples from diverse libraries to be imported directly from a CD.