Guitar amps have evolved continuously over the years, and many current designs incorporate some very advanced features, though there is also an opposing trend producing purist designs with minimal circuitry and short signal paths.

While many players use a variety of pedals or rack FX units, most still look to the amp itself to shape their basic sound - why buy a valve amp only to fall back on transistor-based overdrive? The amount of distortion is easily the most important defining feature of any guitar sound, from the squeaky clean sounds appropriate to much pop, funk and disco playing, to the face-melting full shred sounds of def metal. 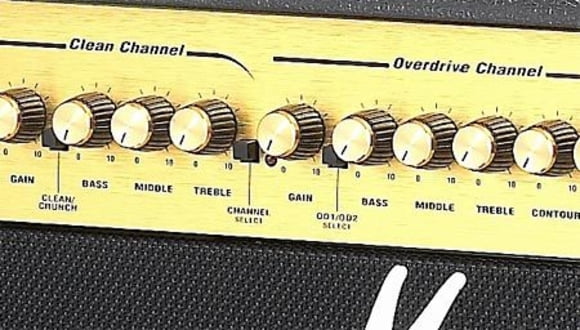 Many common features of guitar amps are aimed at live use - recording provides the luxury of time to set up and tweak the sound required for each part in a song, but on a gig, each sound must be set up in advance and ready to go. Most modern guitar amps achieve this by having two or more separate channels essentially separate preamps and a footswitch to select between them. In many situations, this means a relatively clean sound for rhythm work and an overdriven sound for solos - most two-channel amps therefore have a clean channel and a lead’ channel. There is usually some overlap between the sounds achievable on each of these, so the clean channel will go as far as moderate crunch for example, and the lead channel will go from crunch to full distortion.

Three-channel amps offer even more flexibility by adding a dedicated crunch channel. In this way, three distinct sounds can be set up and level-matched for seamless switching.

The basic character of the distortion sound is one of the most important factors affecting the choice of amp. Guitar sounds are notoriously hard to describe in words, but styling and associated marketing usually provide a very useful guide to the type of sound you can expect from an amp. For example, most Marshall amps are aimed squarely at straightforward rock, while Mesa-Boogie's ‘Lonestar combos excel in all styles associated with the State of Texas.

Almost all amps offer some form of tone control, though some are much more powerful than others. Simpler designs tend to have master bass and treble controls which apply across all channels, while more sophisticated two and three-channel amps have independent controls for each channel. The most flexible amps also offer a variety of tone-shaping options specific to each channel, such as presence, which adds high frequency sparkle, and a fat switch for extra body.

Almost all serious amps include this feature, which enables FX pedals or rack equipment to be connected between the pre and power-amp stages. While there are many situations in which it's fine to connect effects between guitar and amp, this does not work well when using the amp's own overdrive and effects such as chorus or flanging. These effects must come after distortion in the signal chain - chorus before distortion sounds simply terrible. Other effects such as delay and wah wah can be validly placed either before or after distortion, but with very different results. 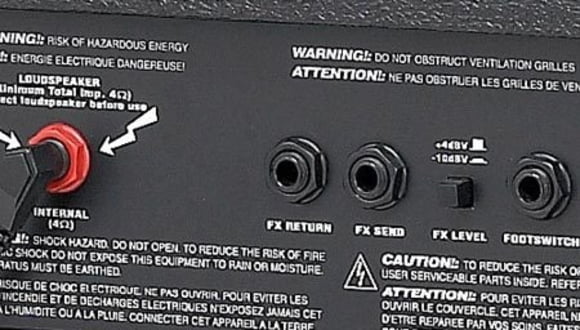 Ideally the FX loop should be capable of being switched in and out by footswitch, allowing a predefined FX setup involving several pedals to be activated in one movement. Some high-end amps have several switching options, or even separate loops for each channel.

Most amps offer at least one onboard effect - reverb. In traditional designs, this takes the form of an analogue spring reverb unit or tank. The signal is fed to a coil which excites one end of a spring, and this is picked up by a magnetic pickup at the other end. The complex pattern of delayed signals is similar in some ways to the multiple reflections generated in a live space, and thus an effective (though not necessarily natural) reverb sound is produced. Spring reverb has become a generic ingredient in most electric guitar sounds, and has therefore survived into the digital age.

Other effects –usually digital– include chorus, flanging, delay and various other reverb types such as hall reverb and digitally simulated spring/plate reverb sounds. Some amps do seem to include FX as an afterthought, and although having some FX is more useful than having none, these are usually much less powerful than inserting a dedicated multi-FX unit in the FX loop.

For more information on the use of FX with guitar amps, you may wish to consult our Guitar Setups Online Advisor.

A wide variety of other features may be encountered. Here are some of the most useful: