Since the Fifties, two basic types of amplifier setup have been available - the separate amp or head and speaker setup (known since the Seventies as a stack), and the combination amplifier or combo, where both are housed in a single unit.

Most amp manufacturers make both combos and stacks - the same design is often released in both forms. The main reason for separating the amp and speaker cabinet is a practical one –guitar amps contain some pretty heavy components. Guitar cabinets usually use ten or twelve-inch speakers. 2x12 is generally the practical limit for combos, whereas most stacks employ one or more 4x12 cabinets. Picture Jimmy Page or Eddie Van Halen on stage, and your mental image probably features a Marshall stack with two 4x12 cabs. Escalating volume levels among stadium rock bands in the Seventies and Eighties led to the common sight of a whole row of these on stage, though these days it's not unusual for one cab to be miked and fed to the PA system, while the rest of the cabs are empty and there purely for show! 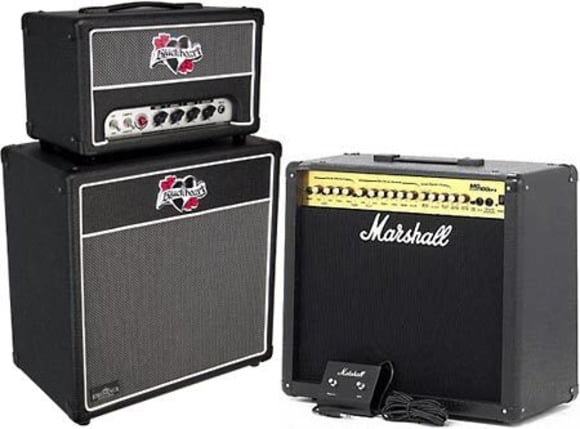 There is something about the sound and feel of playing through a stack that you don't quite get with a combo –not just the sheer volume level (some combos have more than enough volume for most gigs), but the sense of solidity and chunkiness, particularly in the bottom end, which results from the amount of air that four or more speakers can move.

Combo amps have their own distinct advantages too. These include relative portability (though some, particularly valve amps, are still rather heavy) and ease of setup and use. Small combos are generally more suitable for more intimate venues, and styles other than rock. Where the big names such as Marshall and Laney dominate the stack market, many smaller companies maintain their own loyal user bases among combo users, which tend to be grouped in terms of musical style - many jazz players would never consider using anything other than a Polytone amp, for example.