The name says it all. Vibrato is created by the even, periodic variation of the pitch by 6 to 20 Hz. It is rarely used as a pure guitar effect - the guitar players tend to favor the finger vibrato or the whammy bars instead. Keyboard players are obviously not able to do so, this is the reason the vast majority of synths etc. already have this function built in. 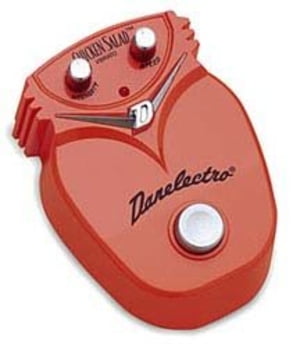 How the designers working with Danelectro came up with "Chicken Salad" as a moniker for a vibrato pedal is perhaps not that easy to comprehend. The Speed and intensity can be adjusted, and it gives the guitar a certain psychedelic touch, which evokes the sound of Jimi Hendrix or Robin Trower. One can perhaps describe it most accurately as a mixture of Leslie, phaser and chorus. Though the best way to understand it is to listen to it.