Keys aren't the only thing a keyboard has. It would be offensive to call an instrument as influential as the grand piano a "keyboard". And in any case, a piano will always be a piano, just as an organ will always be an organ.

Keyboards didn't become keyboards until electronics were integrated with the white and black keys, when the sound production became artificial and the tone could be heard only by connecting the keyboard to an additional amplifier. Keyboards are therefore those keyboard instruments which generate sound waves not by themselves, but purely electronically.

Everything actually started with an organ, namely the Hammond Organ. The development of which was based on a series of coincidences. The developer, an american named Laurens Hammond, was an inventor who studied mechanical and electrical engineering. He already had patents in his name at the time and in addition to his studies had successfully written a screenplay. 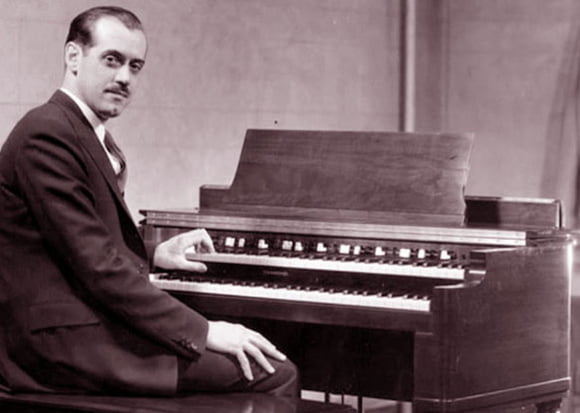 Employed at a company who made ship engines, he invented a clock in 1920, whose noisy drive was damped by a housing. It was a success and Hammond became a self-supported inventor. His work continued in various stages: the development of a synchronous motor, the invention of the red-green 3-D glasses, conversion of alternating current into direct current a radio through the so-called A-box, the electric clock and finally in 1928, establishment of the Hammond clock Company.

The electronic clock business didn't go so well and nearly brought the company to the edge of bankruptcy. Hammond continued to work on his synchronous motor and consider where it could be best applied. Around 1933 his mind turned to music production and the tone-wheel-generator was born.

On the bottom was a small wheel, concentrically mounted on a motor shaft. However, the wheel was not smooth on its edge, it looked like a gear. This turned in front of an electromagnet.

If you payed attention in physics you'll know what happened. As we all, hopefully, know, a current-carrying conductor generates a magnetic field. Moving a wire or piece of metal through the magnetic field of a permanent magnet creates a current dependent on the speed of movement and how far away the metal is.

What Hammond took from this physics lesson was that the grooves and spikes on the wheel would influence the magnetic field differently, so at regular intervals the induced current would increase or decrease. He then wrapped a wire around the magnet and was able to either dissipate or amplify the current. In a radio, the amplified current was audible through a speaker because the constantly changing current level creates movement in the speaker membrane, which is how sound waves are produced. Through his experiments Hammond had grasped the basic principle of all musical instruments, according to which certain vibration patterns are transformed into sounds. Now however he had succeeded and representing this using electrical energy. 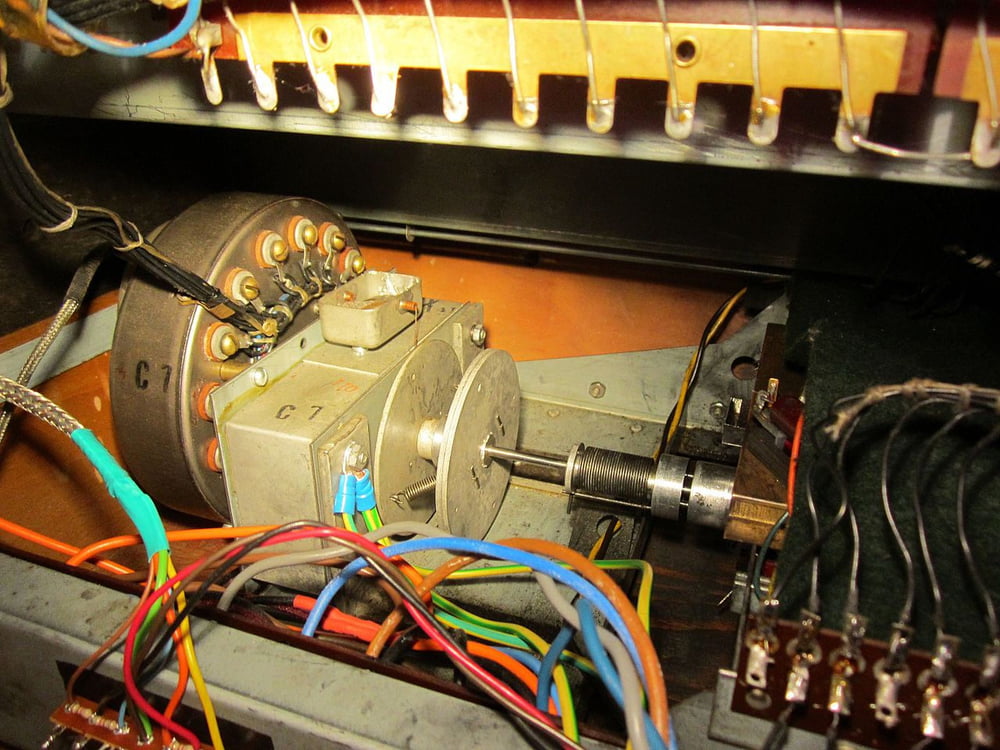 The synchronous motor of a Hammond B-3 with a Vibrato-Scanner and flywheels
Mepaja / CC-BY-SA4.0

At first it was only possible for him to create a single flute like sound. It would take a lot of effort to create complex music. The attempts were diverse and unnerving for Hammond until he bought an old piano and used the keyboard. Electrical contacts were connected under each key, each of which was connected to its own wheel-magnet combination. The very precisely rotating synchronous motor used a complicated transmission gear to to 91 differently sized tone-wheels at different speeds, which induced current in 91 individual magnets. If a key was pressed, specific switches were activated, closing the respective circuit. However this also offered the option of adding overtones to each tone with the drawbar. All of this was mounted in a housing along with an amplifier and speakers. All together this weighed around 3 to 4 hundred pounds.

With that the Hammond Organ was born. On April 24th, 1934 Hammond received his patent from Washington. This church organ in a box, as people called it, would become world-renowned. It was seen as a complete replacement for the pipe organ and people thought it was one in listening comparisons. The electromagnetic principle was used until 1967. At that time the Hammond Organ Company began to build organs with purely electronic parts. At first, however, they didn't have the same flair or typical sound. But later, when Hammond was taken over by the Japanese company Suzuki, digital sound production enabled Hammond-Suzuki to build the Hammond XB-3; It is visually a replica of the B-3 and costed around 10,000 euros. Technically however it is a completely digital instrument. The old Hammond sound was carefully recreated and critics say that the organ sounds like a Hammond should.

Of course the Hammond has been constantly improved and expanded since 1934. 32 drawbars, several preset keys, the legendary Hammond reverb, and the tube amp made it the keyboard instrument of choice. Different models made for different requirements have been launched. And models like the A-100 or B-3 are still in demand today within rock music circles, even though they are now only available used and still very expensive.

What makes the Hammond sound so desirable that every sound artist today strives to reproduce it as faithfully as possible in his synthesizer, expander or sampler? Well, first of all, there is the sine wave, the pure waveform that is generated by the generator rotation. The overtones that are added to this via the drawbars remain harmonious, since they are in a fixed ratio to the main tone.

Another important element of the Hammond sound is the so-called click, the electrical cracking of the key contacts. You'd think that would be a negative but this click makes the sound so vivid that modern keyboards artificially create it.

In addition, the tube sound with a creamy, rough overdrive depending on the volume belongs to Hammond. This is where so many rock bands of the 60's and 70's discovered their distinctive sound.

Last but not least, the accessory that every Hammond player has next to their 'box organ' has to be mentioned: another box called 'Leslie'. The Leslie Cabinet is a very special thing. It contains two amplifiers, one drives a high frequency horn that sits in the top of the case, the other controls a bass speaker in the bottom of the case. 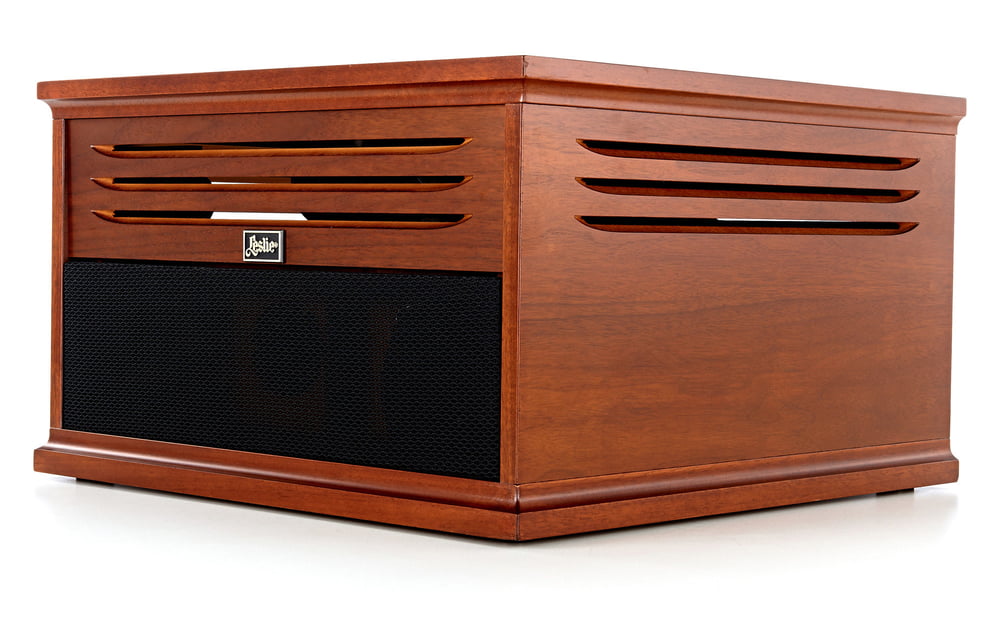 The trick here is that the high-frequency horn is driven by a motor, while a separate motor rotates a drum around the bass speaker. You can use a switch on the organ to control the motors in 3 ways: standstill, slow turning, and fast turning. With a slow rotation, the space-filling chorus-like organ sound is created by the radiating Leslie, while a fast rotation produces a vibrato effect. It goes without saying that the Leslie can now be perfectly reproduced with digital effects processors. And you can usually find it under the name 'Rotary' in a menu.

Still, many organists still believe that only a 'real Hammond' (the electromagnetic) in combination with a 'real Leslie' can produce the 'true sound'. Leaving the transport problem to the roadies.