Like most other brass wind instruments, the tuba originates in Ancient Rome. From an original tube (tubus is the Latin word), similar to the brass or bronze uncoiled trumpets used to play fanfares to this very day, many brass instruments started developing from the 11th century onward; for example, early trumpets and trombones.

Music became more and more sophisticated throughout the Middle Ages and the Renaissance, requiring instruments able to play larger ranges with more half tones. The serpent (see figure), a member of the cornett family, was invented in the 15th century. From the seventeenth century onward, the bass register was complemented by the bass horn, and the ophicleide invented in the 18th century was the first bass instrument among brass wind instruments. 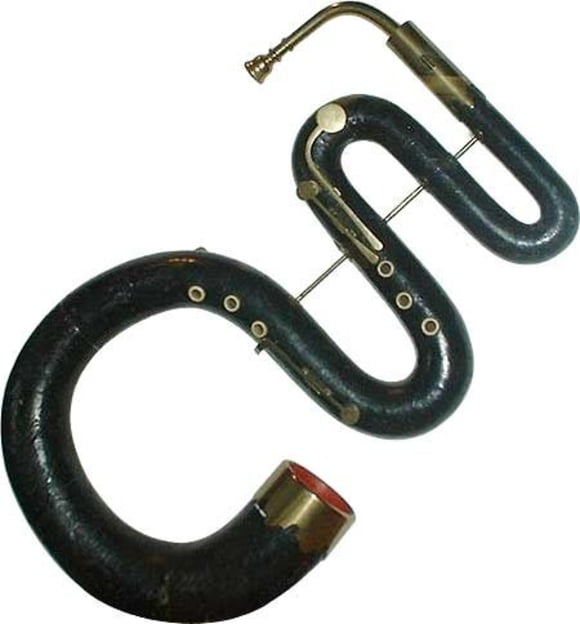 Since then, tubas with a great variety of pitches and construction types, and with different types and arrangements of valves, have been built. The tuba we know today is quite a young instrument. As the bass instruments previously mentioned were rather difficult to play and didn't really manage to assert themselves over other instruments, the first tuba, a member of the bugle family, built of metal with valves shortly after valves were developed, was a game changer.

The classical literature distinguishes contrabass tubas and bass tubas. Depending on the composition to be played and the conductor's interpretation thereof, one or the other is required to complete the orchestra's brass section for the piece. Sometimes more than one tuba needs to be included. As the name indicates, the notation is different by an octave.

The tuba has taken on many challenges since its first use in military music - being included in symphonic music by Richard Wagner, through use in central European folk music all the way into jazz where it plays some exceptional solos - and it has mastered them all.