A new student model will generally cost in the region of £1,000, usually including a case and some accessories such as cleaners, but not including any reeds. Sometimes, funding can be found from charitable trusts if the cost is too high to be managed. 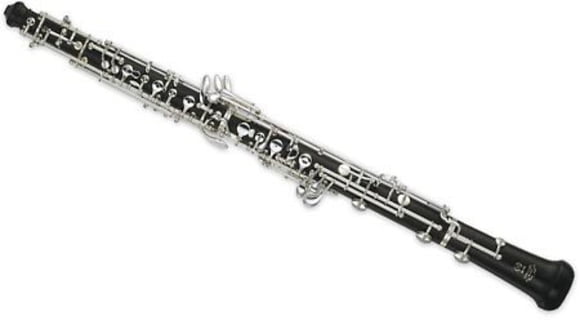 When considering which kind of oboe to buy, there are some factors to take into account which are common to all oboes. These are often a matter of personal preference, and a teacher will be the best person to advise. Firstly, the material - the large majority of oboes are made of grenadilla wood, however some student models are made of plastic. Plastic oboes tend to produce a harder sound, although they have the advantage that they will not crack in cold weather, and they can be lighter than wooden instruments. Secondly, the fingering system - English oboes are made with the ‘thumbplate’ system, whereas French oboes use the ‘conservatoire’ system. The different systems mean that some notes have different fingerings, but no one system is better – it is just a case of getting used to whichever one you have. The system can have either ‘covered’ or ‘open’ holes. Open holes are thought by some to allow greater resonance in the instrument, but covered holes are easier to manage, especially for small fingers, as less accuracy is needed to cover the key. Thirdly, octave keys - in general, student models have only two octave keys – the third which appears on more advanced models is to help with the extreme high register which will not be required when starting out. Octave keys are described as being either ‘semi’ or fully automatic. Semi-automatic means that there are three octave keys, each activated individually as necessary, though the second key automatically puts the first key down as well. Fully-automatic combines the first two octave keys into one key, which sounds easier, but in practice needs considerable accuracy with the G key to activate properly. Semi-automatic feels more natural, while fully-automatic is a more complicated mechanism which can add significantly to the price of the instrument.

All the major makers have models designed specifically for students. Some have gone so far as to make them ergonomically designed for smaller people, either by putting extensions on some keys to make the stretch easier, or by making them from lighter materials. Lighter weight of the instrument itself is very helpful, but the type of case, and the practise of carrying bags on alternate shoulders are equally important in preventing back and shoulder problems. (Some brands of case are now designed as backpacks and are very lightweight indeed.) Most oboes now come with adjustable thumb-rests, but if not, they can be added easily.

Every oboe is different, and so they should always be tried by both pupil and teacher using a variety of reeds to check that they suit – Thomann offer a 30 day money back guarantee in order to facilitate this. All the keys should move easily and seal the holes properly, and every note should be easy to produce, with none that are obviously difficult or out of tune. A new oboe will need time to settle, but even so it should be possible to get a good idea of its sound straight away.