Correct neck adjustment is essential for any guitar and also for any bass, where the string buzz should remain within the normal tolerance. Unfortunately, some guitarists decide to tinker with the neck screw intuitively, thereby “improving it for the worse” instead of getting the intended results. We'd like to prepare you for any future adjustments by shining some light on the working principle of the truss rod.

Some basic information about the truss rod:

The strings of a guitar (and those of a bass, obviously) pull on the neck with considerable force. After a while, the neck will inevitably give in and bend upwards slowly, but steadily. To counter this phenomenon, some resourceful guitar builders had the idea to stabilize their instruments' necks with truss rods made from steel or aluminium. They came up with two basic approaches: Adjustable steel rods and the non-adjustible variant. Modern electric guitars (and many acoustic guitars) are usually equipped with an adjustable truss rod. The adjustment screw is located either beneath a cover on the headplate or at the body end of the neck. Depending on the guitar, the neck screw can be adjusted using an Allen wrench (often included), a socket wrench or an ordinary screwdriver.

Before we get to the “how”, we need to determine if the neck does indeed need adjusting. So let's recap: A bent neck results in a higher string action and a decrease in playability. Here's the tragic: Even with the higher action, the guitar can rattle, mostly in the lowest and highest positions. The strings will buzz the least with a neck that's nearly straight. But how do you determine if your guitar's neck is deformed?

These simple tricks can help:

Turning the neck screw clockwise (to the right) tightens the truss rod and the neck moves backwards, becoming straighter.

Turning the neck screw counterclockwise (to the left) releases the truss rod. The neck comes forward, bending up and raising the string action.

But be careful! This should be performed with the utmost sensibility. Even a steel rod can break, and that would lead to expensive repairs, which you can avoid! 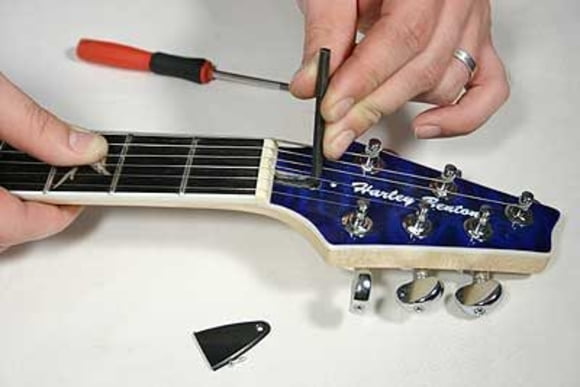 Despite all efforts and a carefully tuned neck, the strings may still buzz.

This is most likely caused by an unevenly bent neck, which cannot be rectified with the steel rod alone. Use the following procedure to determine whether this is the case and which part of the neck is causing the problem. Depress the low E string at the first and last frets and strike the string between those two points. If it doesn't buzz, everything's fine. Now go to the first and next-to-last frets and repeat. If nothing buzzes here, you're good in this area as well. Work through all positions, checking for a clear tone every time. After checking all frets, move in the opposite direction. Start with the first and last frets, checking the string vibration. Now keep the last fret depressed and move your left hand to the second and third frets and so on, checking for buzzing as you go.

If it doesn't buzz at all, your guitar's neck is perfectly adjusted and free of deformations. If you do encounter a buzz in certain places, it is likely that the neck is slightly deformed in these areas. In such a case, adjusting the neck with the truss rod won't be of much help. But don't worry, there's an alternative. The problem can often be solved or at least alleviated by trimming the corresponding frets. This requires the use of a file, which you should better leave up to a professional. Find a competent guitar technician in your area, who will most likely be able to help you.